Brazilian Food that is Out of This World

Come pull up a chair and experience authentic Brazilian cuisine.
View Our Menu

Gourmet Turtle Cheesecake
Our New York style Cheesecake on a layer of fudge topped with caramel sauce and garnished with chopped pecans.
5.95

Tiramisu
A traditional Italian dessert consisting of mascarpone cheese filling, lady fingers that have been skillfully soaked in espresso with a touch of liqueur  for added flavor. Finished with a dusting of cocoa powder.
5.29

Homemade Caramel Flan
A dessert of sweetened egg custard with a caramel sauce.
4.95 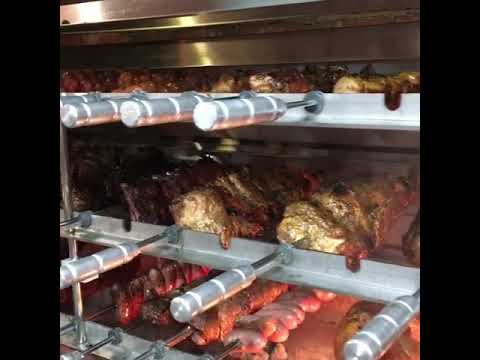 "We had an excellent dining experience. My wife and I took the whole family, and they were able to accommodate all of us quickly. The food was finger licking good!"


Rodízio (pronounced [ʁoˈdʒiziu] in Brazil) is a style of restaurant service in Brazilian restaurants. In most areas of the world outside of Brazil, a rodizio restaurant refers to a Brazilian style steakhouse restaurant. One pays a fixed price (preço fixo) and the waiters bring samples of food to each customer at several times throughout the meal, until the customers signal that they have had enough. In churrascarias or the traditional Brazilian-style steakhouse restaurants, servers come to the table with knives and a skewer, on which are speared various kinds of quality cuts of meat, most commonly local cuts of beef, pork, or chicken. While not as popular, there are other rodízio style restaurants in Brazil, such as ones serving pasta or pizza, where various pizzas and pastas are brought on trays. Rodízio style sushi restaurants are also common in Brazil.

This was amazing. Every cut I received was high quality and cooked to perfection. The lamb was tender enough I could easily cut it with my fork. The service was not just prompt and polite, they were very sweet, kind people.

I love this place. The meat and the food is so delicious. Everyone is so nice and attentive. There is a variety of food and meats that taste so delicious. I would recommend this to everyone. Oh and the Mango Juice, Yum!

My girlfriend and I love this place. It's great to either eat in or take out. Pay by the weight of the food. My favorites are the beef, bacon wrapped chicken, fried plantains and the cooked pineapple.

Let Us Bring Brazil to You!

We offer complete party packages and off-site catering for any occasion.

If you are looking for the best Brazilian restaurant in Worcester look no further than Pampas  Brazilian Steak House. Conveniently located off the Mass Pike Pampas offers up true Authentic Brazilian Cuisine at a fair price. Please come down today and enjoy a taste of Brazil.